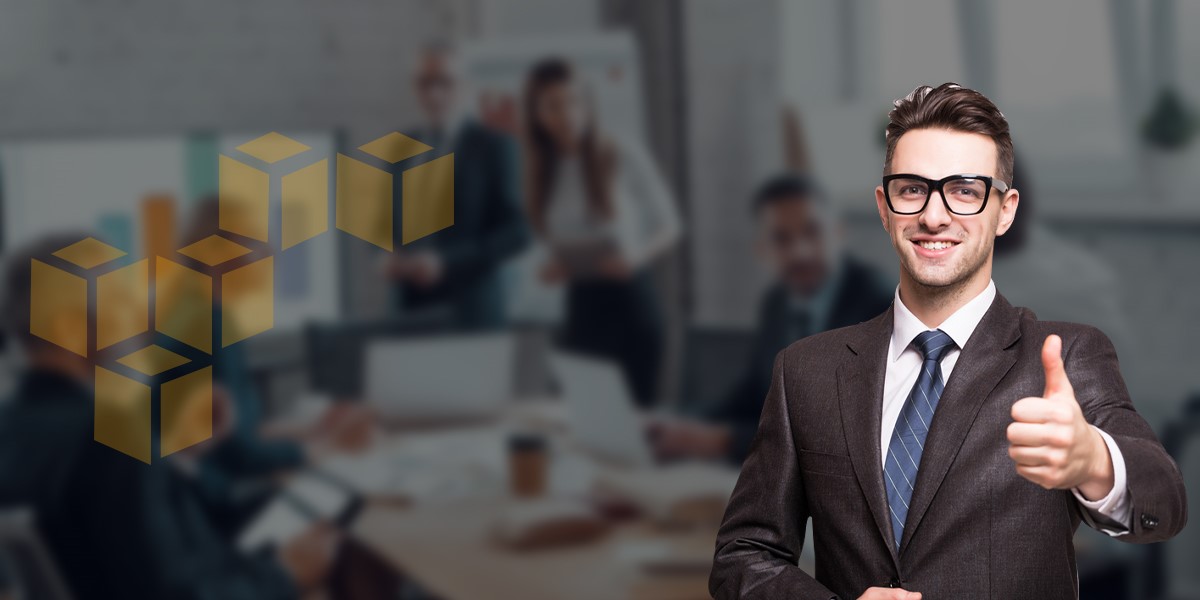 Nintendo Co., Ltd. is a renowned Japanese multinational consumer electronics and video game company headquartered in Kyoto. If the name doesn’t immediately ring a bell, maybe you could recall the famous short, pudgy, Italian plumber – Super Mario? Nintendo is the company that created this world-famous game. In a world where gaming is transforming faster than it takes to create a new game, a lot of game developers struggle to stay relevant. However, Nintendo has been named as one of the Top 50 companies to watch out for in 2021 by Bloomberg. With a market value of $84.1B and an 11% female board leadership, Nintendo is currently on track to release a new version of its switch-gaming system and beat the revenue consensus for the fiscal year ending March 2022.

Such is the popularity of Super Mario all over the world, that when the company decides to launch a new version, gamers all over the world stop and listen. And the demand for the new version would be exponential. How then did Nintendo ensure that everything goes smoothly on launch day and the days after when it launched Super Mario Run? It all happened thank to world’s most popular cloud computing platform – AWS.

Nintendo has always operated with a single big mission – “Put a smile on the faces of Nintendo users”. It provides one-of-a-kind, fun, interesting, and amazing experiences to users worldwide in the field of home entertainment. Historically, Nintendo has been a specialist in gaming consoles for home entertainment, but it is embracing the changing times. Nintendo has been designing games for smart devices seeking to reach customers beyond console users majorly located in industrialized countries, hoping to grow their business and to stay relevant. In turn, this helps the company grow the number of users connected to the Nintendo IP and it can take advantage of the synergies this creates in the gaming console market as well. For this, Nintendo often collaborates with DeNa Co., Ltd. – a company with extensive experience in mobile games, and in the past few years, they have begun offering mobile apps together. One of the games this collaboration produced was Super Mario Run. It was touted as a Mario game that you could play with one hand. It was released on Apple’s App Store in 151 countries and regions across the globe, reaching 40 million downloads in just 4 days of release. It was later released for Android devices on the Google Play Store to be available in 165 countries and regions. 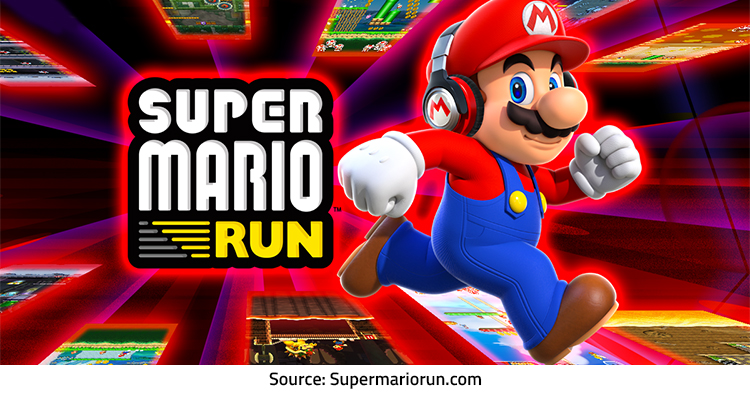 The Challenge of releasing the game on such a grand scale

Releasing a game at such a large scale is no easy job. Such is the popularity of Super Mario that fans all over the world would have pre-registered and be waiting in eager anticipation. A lot of games tend to stagger the release and release it incrementally across individual countries to avoid any glitches and holdups. But not Nintendo. Nintendo decided to release it globally at the same time.

To do this, they required a solid system infrastructure which would have to be built in a very short span of time. At the initial stage, Nintendo had not decided on the infrastructure specifications, though doing a global service launch was always the plan. The infrastructure specifications came through only about two months before the game launch! And to top it all, there was a major issue of managing and maintaining security of the release as well as personal information of the users all over the world. Each country has different versions of personal information protection laws that Nintendo and DeNa would have to comply with.

It was a given that Nintendo would need a cloud-based infrastructure for the worldwide release of Super Mario Run. The selection criteria? There were two –

Nintendo and DeNa found AWS to be the perfect fit for their criteria, and were aware of the flexibility and extensibility that AWS could provide. Games naturally involve immense fluctuations in data loads, which would be extremely difficult to meet with on-premise resources, so cloud was the obvious choice as it would provide the flexibility to handle loads even at peak times, and in turn benefit the company by optimizing costs. But the question that still loomed was if the company should migrate to the cloud from the start since the spike in load was expected only during the initial phase of the launch and a few days after. This initial spike would have been impossible to manage with on-premise resources, that was certain. A large-scale on-premises server would require large operational resources, a constant stable power supply, a cooling system, and so much more. Plus, when the company expanded internationally, they would need overseas servers as well, which would increase the operational load further. These issues were avoided by working with AWS. AWS has been a Godsend for the gaming industry globally, thanks to the advantages it offers in terms of latency, scalability, cost, and ability to reduce operational workload as well as resource needs. Plus, AWS has internationally recognized security and Cloud computing with AWS Certifications, so managing compliances and security wouldn’t be a challenge.

Another reason Nintendo and DeNa specifically chose AWS was because it offered the possibility of migrating DeNa’s architecture directly to the cloud. DeNa has vast experience building large-scale infrastructure for smart devices in on-premise environments. They have the capability and experience of building high-availability systems that could be easily scaled and building on-premise management systems for stable and efficient operations of the infrastructures. However, with Super Mario Run the infrastructure had to be built in a short span of time and running it directly on the cloud. With AWS this could be accomplished easily. 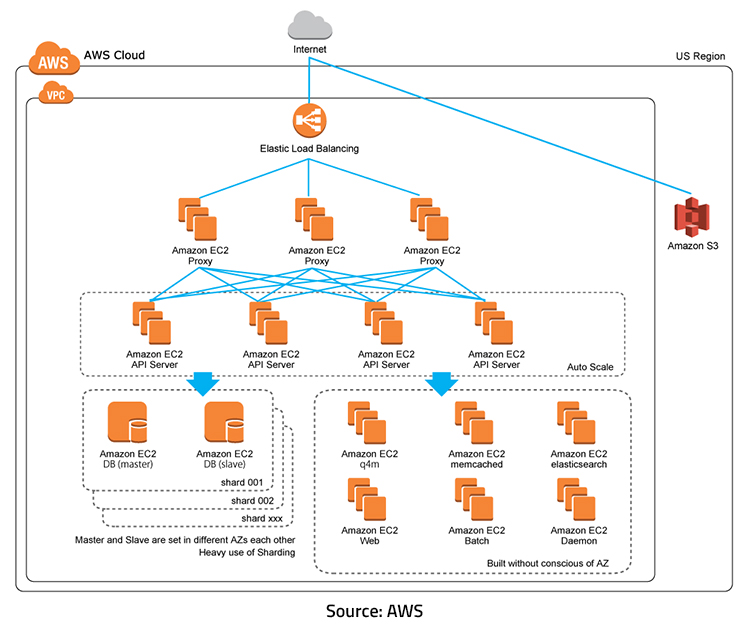 How did choosing AWS enable the world to play Super Mario Run?

The Super Mario Run service infrastructure runs on Amazon Elastic Cloud Compute (Amazon EC2). It comprises of a secure, isolated environment in the Amazon Virtual Private Cloud (Amazon VPC). All types of data is stored using Amazon Simple Storage Service (Amazon S3). Load distribution of player access requests is done using Amazon Elastic Load Balancing. The configuration is centralized to the US region, enabling them to improve processing efficiency and provide a smooth gaming environment for players located all over the world.

After the launch, the number of users for both Apple as well as Android versions kept increasing but no problems were encountered and users were able to experience the game seamlessly. Amazon EC2 has played a critical role in creating the stable infrastructure required to make this happen.

The configuration was finalized two months before the game launch, and then they started building on AWS immediately after. The basic configuration for the game was set up in a month and then Nintendo and DeNa ran comprehensive load tests for the anticipated traffic. During this one-month testing period, Nintendo worked on improving the performance and resolving issues that arose through numerous iterations. This would not have been possible in this time frame if the company had chosen an on-premise infrastructure which would have required additional provisions for data centers, stable power supply, air conditioning, etc. And establishing security protocols and compliances would have taken four to five months. By migrating to AWS, the entire process of building and testing could be completed in two months flat. Also, by doing this, Nintendo could focus on building and testing instead of worrying about procuring and establishing the required infrastructure. Moreover, they were able to avoid the coordination issues that often arise out of having to coordinate between multiple people, especially third-arty vendors, data center operation staff, etc. With AWS, the communication can be confined to just one entity, leading to great reduction in costs.

With Amazon CloudWatch, Nintendo and DeNa could monitor the network and infrastructure easily. Plus, Amazon Identity Access Management (IAM) helped ensure appropriate information sharing and security between Nintendo as well as DeNa.

How could you be a part of such exciting projects?

To be part of such exciting projects, you would need to prove your mettle in the field. And to do that, the first step would be to learn the requisite skills. These skills would also need to be validated by a recognized organization. AWS offers internationally recognized certifications to validate one’s skills in different roles in cloud computing. Of these, one of the most popular roles is that of a cloud solutions architect. For this, AWS offers two levels of certifications – Associate level and Professional level. You could begin by preparing for the associate level certification exam and then work towards growing your career in the field.

How do I prepare for AWS Certified Solutions Architect exam? 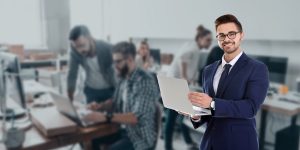