It was in 1999 that this term, Internet of Things, was coined by a man named Kevin Ashton. His idea was that it is a name given to an Internet System which would connect the world through sensors and stored data. The internet connected devices to people ratio have seen a tremendous growth in the past.

From 500 million internet-connected devices over 6.3 billion people in 2003 (which is roughly 0.08 device/person) to 12.5 billion devices over 6.8 billion people globally (a ratio of 1.84 devices/person) the number has shown a massive increase. It is statistics like these which make the expanse of the internet and the concept of the Internet of Things evident.

Several factors are taken into consideration before classifying a device under the umbrella of IoT. Not all electronic devices make the cut. There’re seven notable features for a device to be a part of IoT, vis-a-vis, (a) Sensors (b) Processors (c) Internet Connection (d) Cost-effectiveness (e) Energy-efficiency (f) Quality (g) Security. A device satisfying these parameters can be classified as an IoT device.

We are in the year 2018 now, and there are a lot of things happening around us based on IoT principles. For example, if you are locked out of your car, you can simply call the car company and they send a signal to set off the auto lock. Similarly, you can send signals to your air-conditioners before reaching home and be welcomed to a room with pleasant temperatures. Activities like these have become a household thing.

But it is only after understanding the concept of the Internet of Things that we realize how all of it happens. There are a number of training courses in the market which train people on the IoT technology. These pieces of training are designed to get the students acquainted with the concepts and functionality of the Internet of Things. With all this action happening in this area, there is a huge demand for skilled IoT professionals

Let us steer our focus slightly towards the market trends. Cisco has laid down a data that the Internet of Things has created 19 Trillion USD value at stake for companies and industries. The IoT is expected to grow at a CAGR of 35% from 2014 – 2020.

Statistics from the World Economic Forum suggests that, by 2020, 5 billion people will be connected on the internet with the number of devices being as large as 50 billion. A survey by Business Insider says that more than two-thirds of the consumers plan to buy connected technologies for their homes by 2020 and one half has the same opinion about the wearable technology.

Here is a graph that represents the market growth of the Internet of Things by the year 2019: 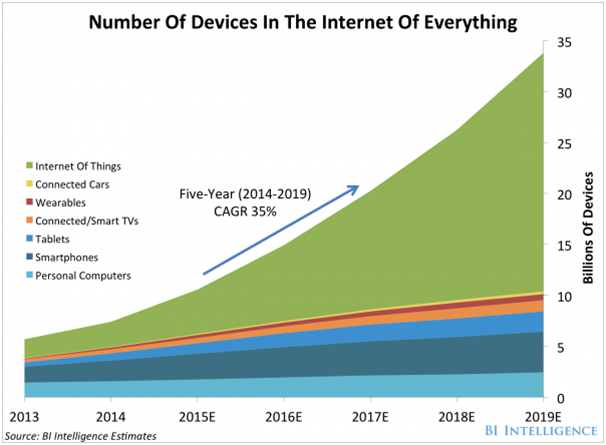 In this era of disruptive technologies, IoT is generating a great demand for skilled professionals. There are numerous training courses in the market which educate on the concepts of IoT. Anyone who aspires to make a career in this field should opt for one of such training. These courses take you through the entire ecosystem of IoT.

Understanding Cloud Platforms, Internet of Things Devices, Sensors and their uses, microcontrollers, and gateways are the key contents of these training. Also, you get trained on other nuances of IoT such as IoT technologies used for communication, various protocols and their applications. Covering the aspects of security to how IoT works and impacts the industry and customers is another dimension of these training.