SMAC has been buzzing the IT industry for past a few years now. But in the last couple of years, this Fusion of technologies is revolutionizing the IT world. Where it has many names, IDC has given the name “Third Platform”, Gartner calls it “Nexus of Forces” and Cognizant coined it as – “SMAC” Social, Mobile, Analytics, and Cloud, which created quite an impact. And a majority, all are talking about the same. And here goes my point of view! These technologies that made heavy use of data, were considered as experimental once, but now have become successful companies’ fuel of existence. They have brought a new era where technology is the foundation of successful businesses, becoming a prime driver of collaboration, business growth, adaptability, innovation, market differentiation and the most important profitability. 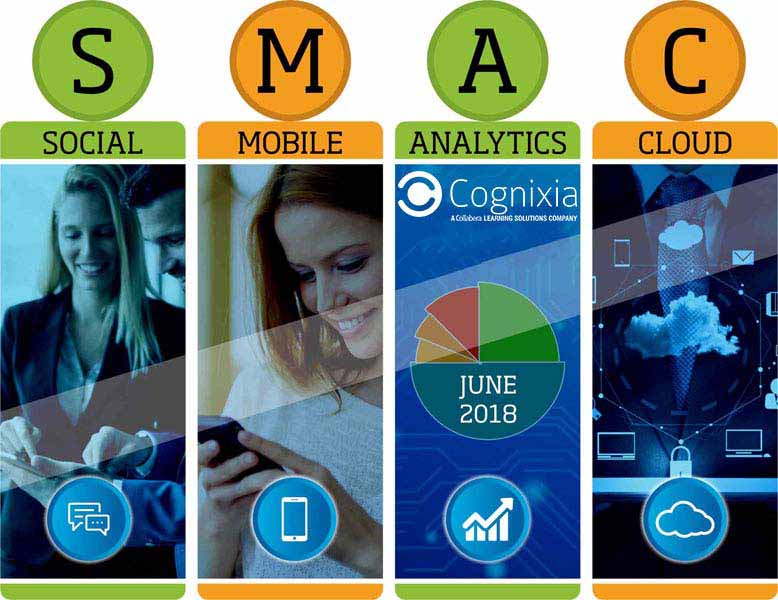 Today, no business discussion is complete without emphasizing impact of SMAC. Faster than ever, the improvements that this fusion has brought, is adding value to the whole gamut of businesses. Advantages are many and are very strong, that promises to predict future (Analytics), availability anywhere (Mobile), everything simple and networked (Social), and at least of its price (Cloud). It has started transforming tomorrow’s era and has an impact on each and every area of the world. And personally speaking, each of these words has played a major role in every individual’s life. Whether or not from an IT background, these technologies have proven to be the basic apatite of the current generation… and the oldies .. well they are not left behind to get this on their plates as well!

Searching in a dictionary Social means “relating to society or its organization” i.e. community, group, shared collective existence, networking etc. So being social means interacting with others and in this era, eventually with the world. Previously the social medium of interaction was face-to-face, newspapers, letters, and phones. But in the Internet age, web-based networking services started connecting people across the Globe, and today Facebook has 1.3 billion active users, which is same as the entire population of world’s most populous country- China!

It’s not just Facebook but many more… MySpace, Twitter, LinkedIn, Bebo, Hi 5, Tagged… and the list goes on. A touch of Social media is a must for enterprise now, be it retailers, banks or the government. With over one billion individuals logged on to various social networks, people are now using social media for advice on what products to buy, where to shop and even regarding what firms they want to work with, it has become an integral part of the life. Highlighting the motive- this medium allows people to leave a trail of data on preferences and relationships with other people. Every time you “like” something, you are generating data that someone, somewhere might be interested in knowing. This data trail benefits the people and the data can be used to provide insight into products and trends to identify information with high social value, in-turn making the world smarter and smaller.

Speaking about Mobility, today Mobile devices have changed the way people access digital content. Smartphones and tablets have brought valuable, rich-digital content to the fingertips of people. There are 7.1 billion people living in this world and 6.6 billion mobile subscribers. In near time there will be more than 10 billion mobile devices which would just be more than the population itself. Almost every information and transaction is available on mobile devices and people use these to its best, may it be for financial services, even shopping is getting smarter and Government is using this channel to reach out to its citizens. Even, in remote villages in emerging economies, where there is no internet access, people carry basic mobile phones for privilege like booking train tickets, money transfers, payments etc. So, almost everybody on this earth is connected through mobile phones, what else might be needed!

Analytics means scientific and systematic analysis of data. Getting an insight into today’s digitally connected world, there is data everywhere which results in an information overload, which cannot be readily used, for productive purposes like decision making. The zeta and petabytes of data generated by individuals, if properly analysed and used in time, can emerge as an unbeatable competitive advantage. And the emerging technologies such as Big Data-Hadoop/Spark, Data Science, and advanced Visualization are allowing companies to absorb, process, and visualize information beyond the capabilities of conventional Business Intelligence and Data Warehouse environments.  These technologies are behind a new level of analytics creating business value and innovation through improved decision making. This foresight can change the face of the world to a better one!

The simple meaning of Cloud related to SMAC is, the benefit of using software applications as a service without buying them! The point here is that the user need not buy and install it, but just start using the software without any cost, and pay as per use. Which sounds perfect and reasonable also! So considering the undeniable fact, that the power of cloud computing is bringing up innovations to improve productivity, which the industry has adopted with open hands. It provides a way that is efficient based on elastic computing. Where AWS Cloud Computing has given rise to several “Something-as-a-Service” or “XaaS” variations such as Infrastructure as a Service (IaaS), Platform as a service (PaaS), Software as a Service (SaaS) and even Mobile Back-end as a Service (MBaaS).  Each of these cloud-based service models provides a varying degree of technical and business capabilities and provide solutions to all major problems. Also, cloud is just not about the cheaper cost, it is also about agility, innovation, access to latest technology, on-demand service and scalability, which covers it all.

If you are reading this part of the article starting from the top! Well, you are likely a person all geared up to plunge and be a part of this SMAC world. Keeping it simple, Companies yet not getting a hold on this, their existence is at stake and the ones who already have adopted, are the smart brains of the market. And individually if you are an IT enthusiastic, you’ll be smart enough to get a hold on atleast some of the technologies making a pioneer contribution in SMAC. Cognixia a Collabera Learning Solutions Company has already taken up this initiative.