Terrorist attacks have existed a long time now.  Whether it’s the 26/11 deadly mass bombings in Mumbai or the 9/11 attacks in the USA, technology has played a role at every step of the way. But with advancements in technology, the terrorist attacks have taken new and advanced forms from mass assassinations to cyber-attacks and cyber-terrorism.

With the rise of different terrorist groups, there is a significant increase in the need to fight against terrorism. This can be achieved by developing new and more effective solutions that can prevent attacks, identify suspects, and speed up the investigation to instantly respond to the situations using new technology. Law enforcement bodies are turning to one such emerging technology, i.e. Machine Learning & AI that has the potential to not only predict the future attacks, but also to catch these terrorists and help save thousands of crimes from happening across the world. 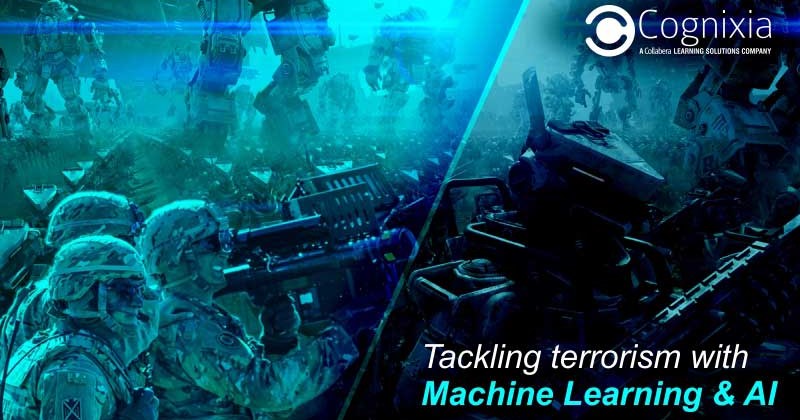 While researchers and scientists make attempts to improve security, the tech disruptors are making significant progress in improving Machine Learning and Artificial Intelligence technology to combat terrorism. At present, there are various tools and techniques in AI that can mine a huge amount of data and find differences in suspicious situations. The unique tools of AI include advanced cameras and smart sensors that have embedded algorithms to identify suspects using photos and videos and read the iris of every person to prevent false identification.

It has come to attention that social media apps, encrypted apps, and private messenger apps are vastly used by terrorists for communication purposes. To put an end to this, companies in the digital communication sector are taking effective measures. For example, Google in alliance with human reviewers and NGOs are working towards a nuanced approach in censoring extremist media; it is targeting hateful content using machine learning-based systems. Secondly, Facebook has developed “text-based algorithms” using machine learning-based systems to spot the ones who support or praise the terrorist groups. These text-based algorithms churn out the messages from past, present, and removed posts and learn to detect similar posts over a period of time.

“Prevention is better than cure”

To be a step ahead of the terrorists, companies have already started investing in Machine Learning & AI technology. With a proactive approach to protect the lives and safeguard public freedom, it is essential to develop and implement “overmatching” security systems.