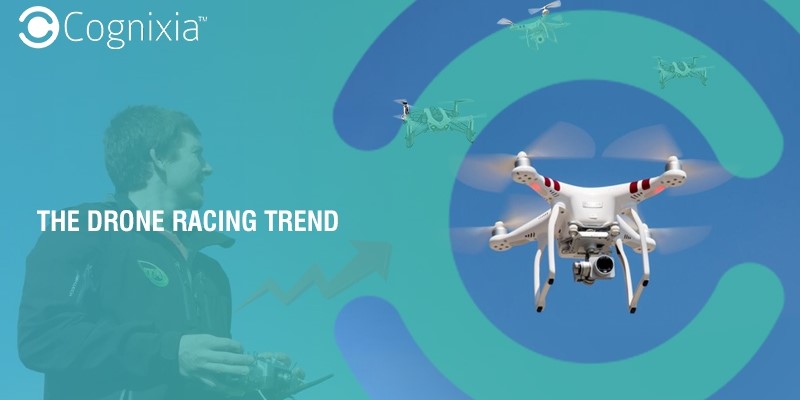 With advances in technology and mankind’s undying fascination with flying, the trend of drone racing is going mainstream, moving beyond being just a geeky sport.

With speeds going as high as 90 mph, floating just a few feet above the ground, the drones zoom past the onlookers, announcing to everyone that this could be a sport that anyone could be a part of.

Today, the drone racing sport has its own leagues, its own television rights, even professional accomplished pilots with quite a lot of dollars at play, and the bragging rights in tow. What captivates the attention of everyone in this sport is how it brings together the innovations of modern technology and the eternal romance that people have had with flying in the sky.

MultiGP, the largest drone racing league in the world, with 22000 international pilots and more than 700 active chapters in every state in the United States and on just about every continent of the world, showcases how drone racing is the fastest growing sport in the world and yet so few know about it.

Drone racing generally involves drone pilots competing against each other on an obstacle course while flying along the course with First Person View (FPV). Pilots generally don the FPV goggles and see exactly what the drone sees and guide the drone accordingly. The entire exercise happens in real time, giving the pilots a feel of actually flying themselves as they guide their drone along the course.

There are many organizations that have plunged into drone racing, encouraging it, organizing events and so much more. The Drone Racing League (DRL) for instance enjoys a huge viewership and distribution. If the official numbers are anything to go by, more than 100 million people have accessed and viewed the content of DRL digitally while over 50 million viewers have watched it on TV. Viewers from more than 75 countries had tuned into the biggest sports broadcasting networks like ESPN, ProSieben, Sky Sports, FOX Sports Asia, OSN and Disney XD to watch the high-on-adrenaline drone races of the DRL.

Even the size of the drones varies across races. Though the small drones remain hugely popular, some drone racing enthusiasts have brought giant drones into play, some going as big as one meter long. These giant drones have all the agility and speed features of the smaller drones but are a lot more complicated to build and drive. However, they can create spectacular crashes which the audience is likely never to forget, attracting more and more spectators to show up.

The innovations in the drone racing sport are primarily driven by the advances in the UAV technology. But one big drawback is the cost involved. Enthusiasts need to shell out about $500 to $1000 right in the beginning itself and expenses would go up as they progress in the drone racing world. Plus, the pilots need to have considerable knowledge of the UAV technology to be able to build and maintain a fully functional racing drone. There are a multitude of organizations, such as Bolt Drones, which are helping enthusiasts with these challenges by coming up with a special drone racing kit that is more accessible and economic for the mass market. The aim here is to help enthusiasts with limited technical knowledge to fulfill their passion for flying. And as is the norm in the world of technology, the prices will fall with time.

The future of drone racing, experts believe, lies in good education and training. Drone racing would require students to not only excel at STEM (Science, Technology, Engineering and Mathematics) but also be full trained to build, manage and maintain drones while keeping up with the advances in technology. A deeper look at the data from the drone racing events reveals how the competitors that come in are getting younger, indicating the increasing popularity of the sport among the high school and college students.

If drone racing is something that entices you and you would like to venture into the field, Cognixia’s courses on Machine Learning, Artificial Intelligence, Internet of Things, and many more emerging technologies can be a game-changer for you. It will equip with the skills to better understand the UAV technology, to help you be a master drone pilot. Also, if you are a recent college graduate, do check out our JUMP (Junior Mentorship Program) to polish up your skills in the latest technologies and explore employment opportunities with the top organizations of the world.

How are distributed systems on Kubernetes evolving?

Why an Organization Should Deploy Power BI in Microsoft Teams?

How to Pick the Right Tools for DevOps?

How will the new Performance Dashboard on AWS help users?