There is a lot happening in the field of IoT than it meets the eye. There are developments being made which affect, and get affected by, the Internet of Things. These changes are affecting the market scenarios like never before. The requirement for IoT developers is increasing at each break of dawn.

The expansion of IoT technology at such high speeds has resulted in an exponential growth of the number of connected devices. One of the basic principles of IoT is, Machines talking to Machines. We are yet to figure out that how meaningful this conversation would be? It has been stated in the past that, the demand for IoT technology cannot be derived from one amazing app but from numerous unexpected new use cases.

This also means that no single company can lead in the IoT market, nor can this be done by one app. This scenario, where the demand is developer driven, will create IoT markets which would be much bigger than our expectations. In an ambiguous situation like this, we can be sure of only one thing and that is – Developers are fundamental in making the Internet of Things market huge and profitable, without even spending a single penny for a sensor in the market. 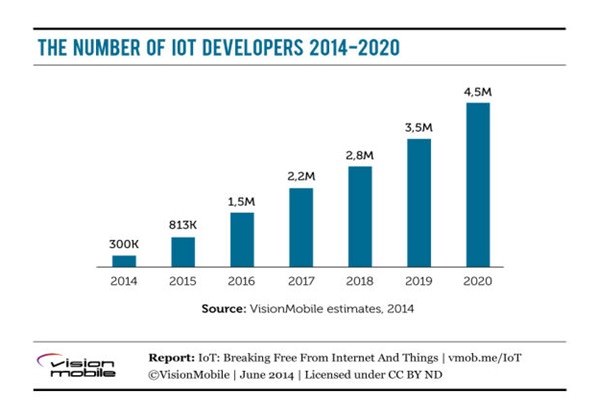 There’s a lot happening around the world with the help of IoT technology. Recently, IBM Research announced an agreement with the City of Johannesburg and the Council for Scientific and Industrial Research to help the city on its air quality management program. Based on IBM’s global Green Horizons Initiative, this partnership will leverage IoT combining it with the analytical power of cognitive computing. This, in turn, would provide insights and suggest actions to improve the air quality in the City of Johannesburg, thus protecting the health of citizens.

Besides the usage of IoT in social causes, it is also affecting the way we do business. The Internet has become an automated entity these days. We are no longer in an era where we “access” the internet. It is present at all times. Internet becoming an inseparable part of our lives, is affecting the physical world on a daily basis. Today, anything, from your microwave to your car key could be connected.

“If it has an on and off switch then chances are it could be a part of the IoT.” – Jacob Morgan, a Forbes contributor.

With this Internet of Things explosion, there has been a visible change in our user behaviors. Today, we expect on-demand services to be present everywhere. The consumer has always been craving for convenience, and the IoT has taken “convenience” to another level altogether. Let’s talk about a consumer-need, as basic as, grocery shopping. Nowadays, you don’t have to go out to run groceries; instead, it shows at your door-step. This is the power of being connected. This change has conditioned us in a way where we have become used to on-demand anything: music, food, films and people.

The Internet of Things is revolutionizing several other technologies. The most prominent example that comes to my mind is of WiFi. The demand for Wifi is increasing enormously due to transmission requirements for massive data. Resultantly, this is straining the current technology.

With the predicted growth of connected devices over the next few years, it has been stated that by 2019, 35 Quintillion bytes of information will be shared each month just by the mobile devices. These statistics encouraged the scientists to develop a new technology which transmits the data, 100 times faster than traditional WiFi.

This newly discovered method is termed LiFi and it is categorized under Visible Light Communication; an LED light flickers at speeds which cannot be caught by the naked eye. A lab test proved that LiFi can transmit data at the rate of 224 gigabytes per second. That is like downloading 18 movies of size 1.5 GB each in a single second. This technology is going to revolutionize the way we share and transfer data.

With such great work being done in the field of IoT, it is certain that the number of work opportunities in this arena will grow exponentially. Keeping this trend in mind, Cognixia has designed training programs for professionals who wish to make a career in IoT. Our certification courses are comprehensive and take the trainee through the entire ecosystem of IoT technology. For further information, write to us