Super Bowl is undoubtedly one of the most popular gaming events that happen every year in the United States. This year, the Super Bowl LIII will take place at the Mercedes-Benz stadium in Atlanta, Georgia; between two time defending American Football Conference (AFC) champions – the New England Patriots and the National Football Conference (NFC) champions – Los Angeles Rams. The winner takes home the title of being the champions of the National Football League (NFL) for the 2018 season. 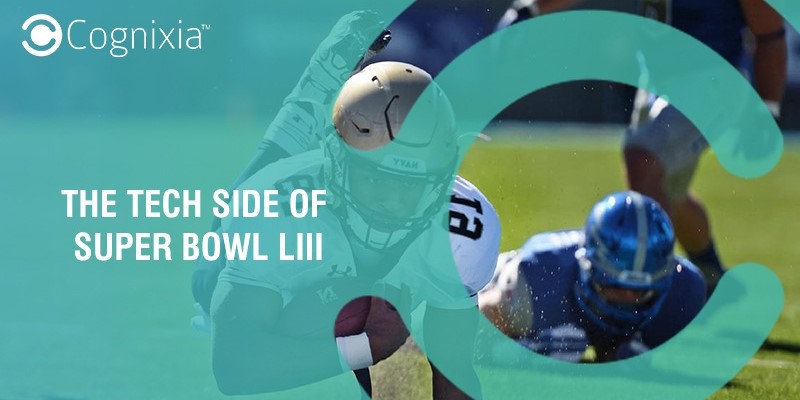 This year, the Super Bowl LIII is set to make digital history by breaking all previous records of data usage. Last year, during the Super Bowl LII between the Patriots and the Philadelphia Eagles was the fifth year in a row to break these records. The fans consumed over 16.31 TB of data over Wi-Fi. The cell usage had also gone up with over 18.8 TB of data going over the Verizon network inside the stadium while over 7.2 TB data for AT&T inside the stadium. For Sprint the combined data utilization both inside and outside the stadium totaled to 9.7 TB.

This week, Sports Illustrated announced its findings from the survey it conducted from 22 to 29 January 2019 covering more than 2800 respondents. A whopping majority of the respondents would still prefer to gather before their televisions to watch the Super Bowl, while about 15% of the respondents will be watching it via the online streaming of the game. If the respondents are bracketed according to age, then about 33% of 18 to 24 year olds would be watching the game via online streaming, one-third of whom would be using the popular platform Roku to stream the game. 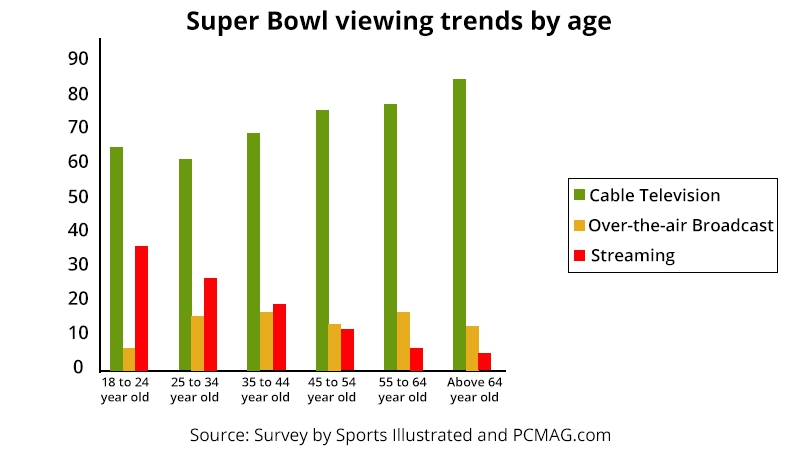 These figures indicate the growing popularity and rate of adoption of technology across various age brackets in the United States. Online streaming usage is picking up gradually across the population with increasing availability of smart devices and internet connectivity and is changing the trends for a traditionally family-oriented event like Super Bowl, which has otherwise always been something that family and friends watch and celebrate together. Super Bowl is after all American Television’s most-watched broadcast of the year.

The Mercedes Benz Stadium is one of the most technologically advanced stadiums in the United States, and has even won the SportsTechie Award for the Most Innovative Venue in 2017. It uses the IBM Cloud as the basis for a converged network having over 4000 miles of fiber on a passive optical network in order to support the IoT connected devices throughout the stadium. The stadium has a capacity of 71000, and has more than 90 miles worth of cables and over 2000 wireless access points for Wi-Fi connectivity. The stadium also houses a 360 degree, 63000 square feet HD video Halo Board with more than 2000 video displays. There are neutral host Distributed Antenna Systems (DAS) and all the four major network carriers – Verizon, AT&T, Sprint and T-Mobile have signed up for it, giving fans the chance to use their own cellular service with seamless connectivity or choose to use the stadium’s Wi-Fi___33 access. Extreme Networks is the official Wi-Fi analytics provider for the Super Bowl, sixth year in a row now. Facebook, Snapchat, Twitter, Instagram and LinkedIn have been the top 5 preferred social media apps, in that order of popularity. Extreme Networks reports a 65% increase in social data last year, as compared to the previous Super Bowl and this year the numbers are expected to go up further.

Another notable feature for the Super Bowl III is the deployment of Intel True View. The Intel True View is a camera-based system that has enabled NFL to pull up 360 degree replays, from every possible vantage point and even from the player’s perspective. The system has been in place at the current Super bowl venue – the Mercedes Benz Stadium in Atlanta, Georgia since last summer. At the Mercedes Benz Stadium, the system is powered by 38 5K ultra-HD cameras, Intel Core i7 servers and computers capable of processing over 1 TB of data for giving out a volumetric presentation (one that includes height, width as well as depth) for every 15 to 30 second clip of the game. There are more than five mile long fiber optic cables laid out that connect the devices to the control room where the volumetric videos are processed. The dynamic replays are then rendered into multi-perspective 3D output using voxels (pixel with volume), which then come together to create a 360 degree reconstruction of the play which can now be viewed from every possible viewing angle. This eliminates the need for a helmet camera and yet gives a complete HD coverage of all the action and movement of the ball. These clips can also be used to analyze the game strategy and the tactics used by the teams by adding commentary and overlaying graphics to not only understand the game better but also enhance the experience of the game. The broadcaster for Super Bowl LIII – CBS will also be using a dual SkyCam setup for covering the game.

Not only the venue and the coverage, even the Super Bowl bettors are using all possible tech to cement their chances of winning their bets. Numerous computer systems, internet enabled devices, algorithms, etc. have gotten to work to put forth their predictions and analysis. The CBS Sports Computer Model, the Tecmo Super Bowl Prediction, the EA Sports Madden Super Bowl simulation, SIRI, Unanimous AI prediction and many more are all artificial intelligence powered simulations that have been simulating the game tons of times, over and over again, generating humongous amounts of data, which is then analyzed by computer systems to give out the predictions of the Over, the winners, etc.

The FAA has declared the airspace around the Mercedes Benz stadium as a complete “No Drone Zone”, establishing a Temporary Flight Restriction (TFR) prohibiting drones within a 30 nautical miles radius of the stadium up to 17999 feet altitude. This TFR will be in place from 5:30 PM to 11:59 PM. There is also a restriction in place for drone flights for one nautical mile radius around the stadium up to an altitude of 1000 feet on Jan 31, Feb 1 and Feb 2 from 10 AM to 11:59 PM.

What’s more, the Super Bowl LIII is expected to be the last 4G Super Bowl in history, as by 2020 a wide range of 5G devices are expected to be in use. NBA’s Sacramento Kings have begun 5G trials with Verizon to use augmented reality (AR) and virtual reality (VR) for improving fan experience. The 5G technology will significantly improve the viewing experience of the fans watching the game at home or on their mobile devices.

While the Rams and the Patriots are practicing hard to put their best feet forward this Sunday at the Super Bowl LIII, what are you doing to hit your home run in your career? Your existing skills are getting outdated with each passing day and not sharpening them up will hit you hard and affect your career game. Time to wake up, and get certified! Cognixia, a digital transformation preceptor is the perfect partner for you, for all your training needs – whether you are looking to upgrade your own skills, or your entire team’s. With highly experienced trainers, regularly updated curriculum and multiple training modalities on offer, Cognixia has something for all your requirements. Reach out to Cognixia today and who knows you could get that perfect touchdown in your career game!