The image below depicts some of the industrial, commercial, and consumer trends in IoT (Source: IDC) 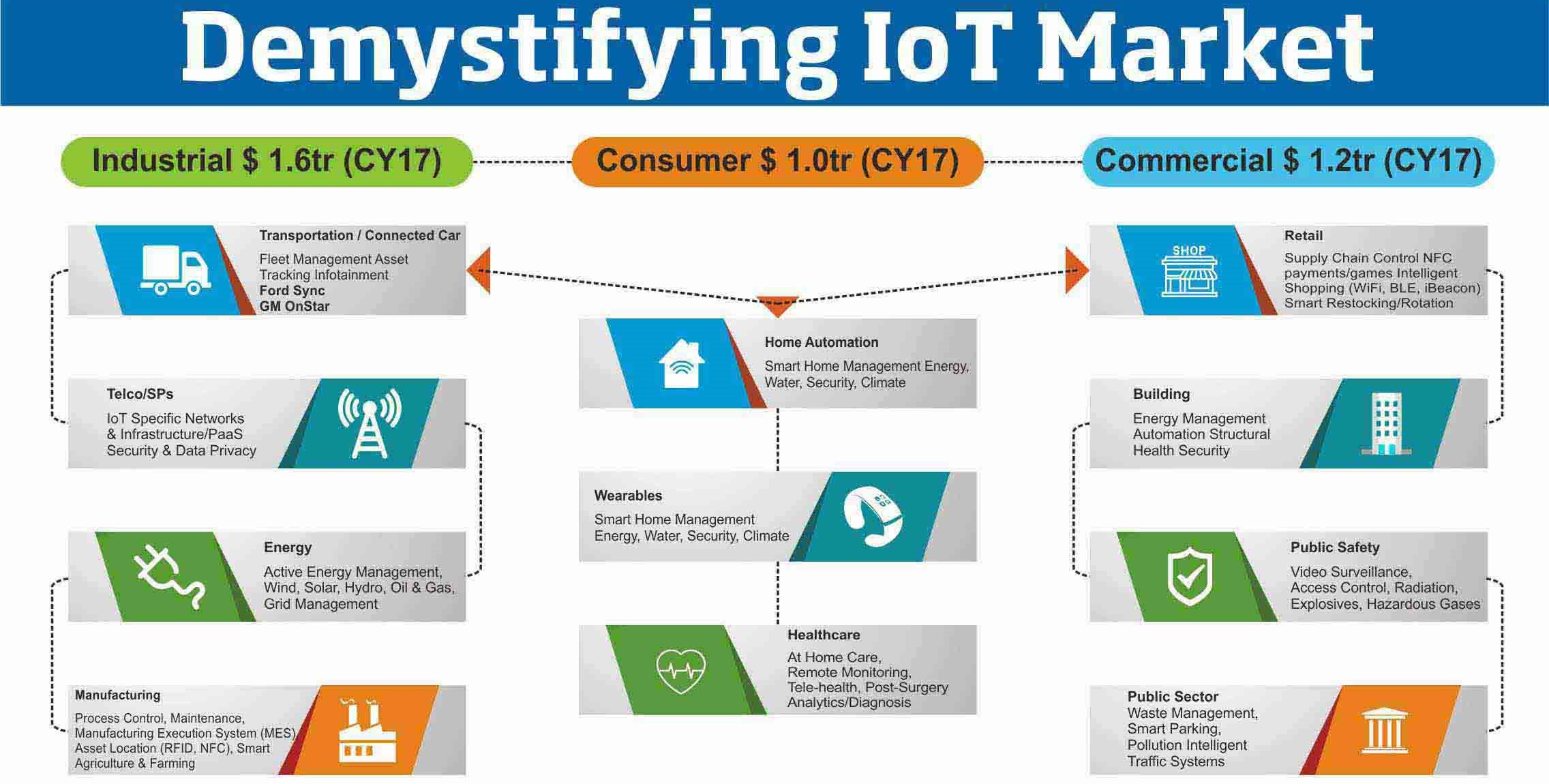 Listed below are some trends which play a significant role in IoT.

The significance of Developers

If you think that IoT is just about making unique, stand-alone devices then you are thinking at a micro level. The bigger players in the IoT market formulate their plans and strategize around developers. These developers have the ability to maximize the scope of a product and take it beyond what it was when it came out from the factory.

Talk of anything from Amazon to Smart Things or Apple or Android Watches, the smart cars, or the VR headsets which have changed the way you watch movies on phones – developers have been playing a significant role in the IoT’s success in the market.

The developers can boost the business in more ways than one. The IoT developers can act as innovators, customers, extenders, and distributors. Organizations have adjusted to the idea of developers being the center of their commercial strategy.

Every major player in the consumer technology market is racing to become your smart home service provider these days. Be it Amazon or AT&T or Xiaomi. This is why it shouldn’t come as a surprise that with one and a half million IoT developers working in it. The smart home is the highest trending sector in the Internet of Things.

There are three competing axes when it comes to smart homes – new touch points, interactions, and developers. These form the core of the user experience but it’s not the smart home hub maker who provides maximum solutions, and all of them raise crucial questions for the future. The question is, in the future who will control the customer relationship?

It is the conversational platforms which are coming up strongly. On the other hand, AI is challenging the central role of developers as creators of use cases. Presently, the major players in the industry are counting on developers to contribute value.

There’s a lot of work done on wearables, and the scope of this wearable has moved past from consumer electronics to embedded clothes. As a result, technology has become more relevant for fashion organizations. The time is not far when brands will compete on digital identity as this will give them to garner a powerful connection with the user. Apps will form a competing ground for smart-watches and AR/VR platforms.

The newer platforms are posing as challengers to Android in the smart-watches spectrum. On one hand, there are Chinese companies who design their own Android-like wearables and on the other are challengers whose Tizen and webOS based platforms are victimizing Android. This is another area where the companies are competing to make a mark.

The smart transportation is evolving. There is a shift in the spotlight in connected cars from console to vehicle data, and the future will be about data-driven transportation platforms. This change has left the car makers struggling to exercise control and gaining access to the supply chain, expertise, and data. Car makers have buckled up and are working on IoT more than ever before.

Converging of Consumer and Enterprise Technology

The majority of industries are witnessing a fast convergence of consumer and enterprise technology. This convergence will lead to your smart home turning into a smart office, and your smart TV will evolve into an apparatus for a meeting room. It is believed that consumer technology is going to become the first brick in building a converged future.

This would be the result of consumer markets offering relatively faster evolution of products with customers. The future will witness ease of installing consumer-grade brought together with enterprise-grade security. This trend will see the developers shuttling from consumer technology to enterprise technology.

The business models in the IoT are changing and rapidly shifting from selling products to generating continuous revenue, from products to services. Industrial Internet of Things technology presents a chance for vendors to offer jet engines or locomotives in form of services and not as products. When it comes to smart homes, smart appliances are harnessing the sales for consumables. This is how IoT is driving businesses these days.

These trends are a proof of a bright future of IoT. A report by VisionMobile says that there will be a need of 4.5 million developers by the year 2020. With such numbers to support the growth statistics of IoT, you can be sure of great opportunities heading your way. At Cognixia, we provide one of the best IoT Training programs which prepare you for the future in the best manner. For further information, you can write to us