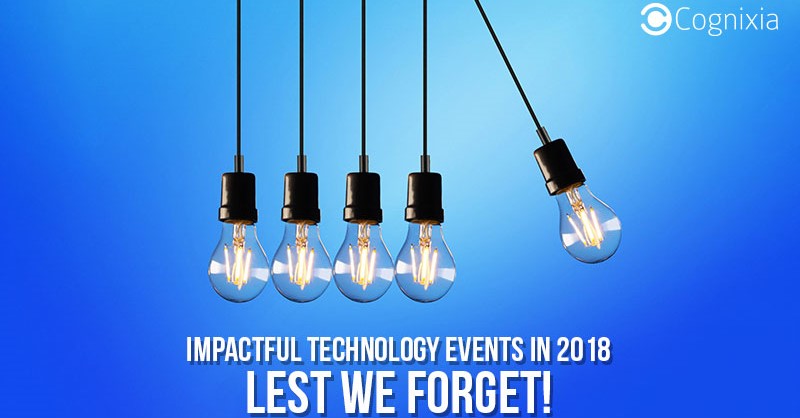 They say: One must always be interested in the future because that is where one is supposed to spend the rest of one’s life. It is, however, also true that those who do not learn from history are destined to repeat it. So, there is nothing wrong in looking back and learning from the past. One must, of course, refrain from dwelling upon in the past.

The world of technology rides on the ephemeral tide. Technologies, no matter how worthwhile, do not stay forever. Once they ruled our lives, but still we have bid them adieu, reinforcing the fact that technologies come and go. The year 2018 had a fair share of such farewells to technologies. Apart from this, every year is composed of events that can be categorized as the good, the bad, or the ugly. Abstaining ourselves from using these adjectives, we will pick up 5 of the impactful events of the year 2018 in the technology world and their future implications.

Before we relate our list of 5 impactful events, we would like to make a special mention about another event that will remain the biggest, not only of a year or a decade, but of the whole century. And this was the sad demise of one of the greatest minds and souls to ever inhabit the earth – Stephen Hawking. The day was March 18th, 2018. His work on black holes and relativity will continue to enlighten and inspire scientific and technological breakthroughs in the future.

Most of us poured our hearts out on social media without considering the security of our data and an apparent sub-conscious assumption of being safe on it. Cambridge Analytica opened our eyes with a thrust. About 50 to 80 million users’ data have been estimated to be compromised and 2 political events – the US elections and the Brexit referendum are believed to have changed course due to this security lapse.
Future Implication: People have become more aware, and companies are putting higher value to their personal data in their marketing and advertising campaigns. Personal data leads to identifying political leanings that can further give rise to false propagandizing at an alarming rate.

Yahoo Messenger launched in 1998 was once very popular. Kids of the 90s have sweet memories of their romantic online escapades—thanks to Yahoo Messenger and its chat rooms where you could communicate in groups. July 17th was its last day.
Future Implication: Yahoo Messenger failed against its competitors Whatsapp, Facebook, Instagram, etc. No matter how popular a technology once was, if it fails to align with the emerging and changing times, it is doomed to end.

The Launch of Azure Sphere

The launch of Linux-based OS by Microsoft for Internet of Things (IoT) applications was a significant development of 2018. This is the first Linux-based product by Microsoft and the second Unix-like OS for public users.
Future Implication: Devices connected to the Internet are set to proliferate. Azure Sphere would ensure these devices are connected well incorporating every security feature, especially at a time when cybercrimes are on a rise.

Whether it is IBM’s quest to become one of the top cloud powers or simply the expansion of their empire, the fact is in October, IBM bought out the technology giant Red Hat for a monstrous $34 billion.
Future Implication: Microsoft and Amazon Web Services may witness the rise of a formidable competitor on the cloud front, not immediately but in the upcoming years.

Spectre and Meltdown are 2 hardware vulnerabilities that have significantly afflicted the modern processors leaking passwords and sensitive data. Experts believed that every user of a personal computer was at risk. In January, the original findings were termed merely the tip of an ice berg. And in November, 7 new attacks were discovered. Intel, Microsoft, Google, AMD, and every other player in the market launched critical updates.

Future Implications: To solve the issue, it requires updates to be installed rather than simply releasing them. Moreover, billions of systems are powered by the chips having the 2 vulnerabilities which make the task extremely demanding as new attacks also have to be addressed. Cybersecurity is thus an on-going process and not a fixed destination!