After a lot of anticipation, Facebook has announced the details of its cryptocurrency – Libra. The announcement was made by Facebook by releasing a 29-page whitepaper giving out all the details, including the protocol that has been designed to evolve it into a new global currency. Libra would let users buy products, and send money to other users with nearly zero fees. To use Libra, users would need to pseudonymously buy or cash out their Libra online or at local exchange points, such as grocery stores and they can then spend it using interoperable third-party wallet apps or Facebook’s own Calibra wallet. This Calibra wallet would be built into WhatsApp, Messenger and would also have its own standalone app. The public launch of Libra is slated for the first half of 2020.

One of the most popular features of any blockchain is its decentralized structure and the absence of any single controlling entity. In line with this, Facebook will also not fully control Libra, and would get just a single vote for Libra’s governance, same as the other founding members of Libra, which includes names like Visa, Uber, and Andreessen Horowitz – who have invested at least $10 million each into the Libra project. The aim is to promote the open-sourced Libra blockchain and developer platform with its own Move programming language, and also have enterprises sign up to accept payments via Libra and give its customers exclusive discounts and rewards. 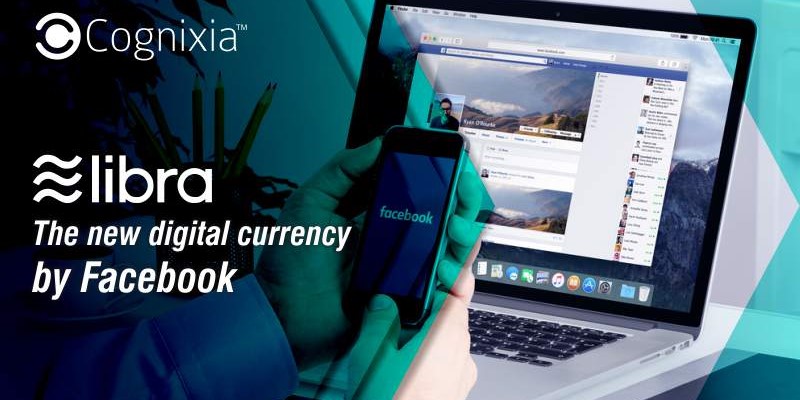 A separate subsidiary company called Calibra has been launched to manage the crypto dealings of Libra, and also protect the privacy of Libra users. This way a user’s Libra payments are never mingled with the data they share on Facebook, so that information cannot be used for ad-targeting. Like any cryptocurrency, users’ real identities won’t be tied to their publicly visible transactions. Calibra makes money by earning interest on the money that the users cash, which has been held in reserve to keep the value of Libra stable.

Calibra has significant privacy and decentralization features built into it, assuring users of security and privacy in their transactions on the cryptocurrency. Libra makes an audacious bid to become a global digital currency or the new ‘PayPal’ and promote financial inclusion, bringing the more than 1.7 billion unbanked individuals into its fold.

Earlier cryptocurrencies like Bitcoin and Ethereum were not appropriately engineered to scale up to be a medium of exchange. They had an unanchored price, which was susceptible to huge and completely unpredictable swings, thus making it really tough for merchants and enterprises to accept it as a standard or even one of the accepted modes of payment. This is one reason why most cryptocurrencies so far have not been able to realize their full potential as there have not been enough merchants/enterprises who would accept payments through them, instead of dollars. Moreover, the complexity of usage has also been a bottleneck for the growth of cryptocurrency. To succeed in the marketplace, cryptocurrencies need to be easy to buy and sell, especially for the masses, to ensure wider acceptability and usability. In contrast, Facebook has a really strong relationship with over 7 million advertisers and over 90 million small businesses, and it also has a formidable user experience expertise. Owing to this, it may actually have the potential to overcome the limitations of previous cryptocurrencies and turn Libra into a major success.

What is expected of Libra?

The world waits with baited breath for the launch of Libra next year and hopes that it will be simpler to set up, more commonly recognized as a mode of payment across the globe, be more efficient, charge lesser fees, be a lot more accessible to the unbanked, be more flexible since it is an open source platform and last for a long, long time owing to its decentralized nature.

“Success will mean that a person working abroad has a fast and simple way to send money to family back home, and a college student can pay their rent as easily as they can buy a coffee”

Libra is backed by the founding members of the Libra Association, which oversees the development of the reserve of the real-world assets that give Libra its value and manage the governance rules for Libra. Each of the founding members has invested a minimum of $10 million to join the Association and have had an option to become a validator node operator. They also get a vote in the Libra Association Council and are entitled to a share of the dividend from interest earned on Libra reserves, in proportion of their investment in the association.

Currently the Libra Association has 28 founding members and Facebook aims to reach 100 members before the public launch of Libra. The Association is based in Geneva, Switzerland and will be meeting biannually.

Figure 1: The Founding Members of Libra

A Libra is a unit of the Libra cryptocurrency and is represented by the three wavy horizontal line Unicode character ≋. Every Libra transaction would be permanently written into the Libra blockchain, which is a cryptographically authenticated database acting as a public online ledger. This ledger is designed to handle about a 1000 transactions per second. Whenever a transaction is submitted, each of the nodes would run a calculation based on the existing ledger of all transactions. Courtesy of a Byzantine Fault Tolerance system, two-thirds of the nodes must come to a consensus that the transaction is legitimate, only then can the transaction be executed and written to the blockchain. A structure of Merkle Trees in the code simplifies recognizing the changes made to the Libra blockchain. With 5KB transactions, 1000 verifications per second verifications on commodity CPUs, and up to 4 billion accounts, the Libra blockchain should be able to operate at 1000 transactions per second if nodes use at least 40 Mbps connections and 16TB SSD hard drives. Transactions on Libra are non-reversible. In the event of a cyberattack compromising over one-third of the validator nodes causing a fork in the blockchain, the Libra Association has said that it would temporarily halt transactions, figure out the extent of the damage, and recommend software updates to resolve the fork.

The fee structure for Libra is similar to the one followed by Ethereum – users incur a small fraction of a cent fee to cover the charges for processing the fund transfer. For most users, this fee will be negligible, however, when these ‘gas’ charges are added up, they ensure to turn off  unscrupulous elements from creating millions of transactions to power attacks like spam and denial-of-service.

The Libra blockchain is an open source with an Apache 2.0 license. Any developer can build apps that work with it, by using the Move coding language. Its prototype’s testnet has been launched, so it is in a beta mode currently until the public launch of Libra next year. The Libra Association is also working with HackerOne to launch a bug bounty system, which would pay security researchers to identify flaws and glitches in the system. The Libra Core is being implemented using the Rust programming language for the time being as the Move coding language is still a work-in-progress and Rust is quite superb when it comes to preventing security vulnerabilities.

If we look at the backers of Libra, it is quite likely that eBay, Spotify, etc. would be incentivizing users to adopt Libra by providing special discounts when users pay using Libra coins. There could also be incentives for carrying out a specific number of transactions in a certain period of time.

A lot of hopes are pinned on the potential of Libra to transform the way financial transactions occur, and the names currently backing it sure bear testimony to that. Libra could be the innovation that finally brings blockchain into the financial mainstream and fulfils the dream of financial inclusion for the unbanked. Using Libra is expected to be as simple as – cash in a local currency, get Libra and spend them like the local currency without huge transaction fees or even the user’s real name attached, and then cash out the Libra when desired. Will it actually live up to its hype, is something the world will discover when it actually gets launched and comes into full-fledged operation next year.

If you are looking to jump into this blockchain bandwagon and contribute to the transformation of the world’s financial industry, there couldn’t be a better time than now. There is a burgeoning demand for skilled professionals who understand blockchain and help organizations come up with solutions to embrace this mind-blowing technology. Cognixia’s comprehensive blockchain training programs are sure to set you apart from the rest in the crowd and enhance your employability and earning potential significantly. There is no time to waste any more, enroll for Cognixia’s blockchain training program now! Reach out to us to know more.