Developing applications today is so much more than just writing code. There are multiple languages, frameworks, architectures and discontinuous interfaces between tools for every stage of the lifecycle. This makes the task all the more complex and challenging. Using containers helps simplify and accelerate the workflow, while also giving the developers the liberty to innovate with their choice of tools, application stacks and deployment environments.
Docker is a set of Platform-as-a-Service (PaaS) products that uses Operating System level virtualization to deliver software in containers. Docker is a very popular platform and tool for building, distributing and running containers. Kubernetes is a container orchestration system for Docker containers, meant to coordinate clusters of nodes at scale in production in an effective manner.
Containerized apps use a lot less memory compared to virtual machines, they start up and stop a lot more quickly and they can even be packed considerably more densely on their host hardware. 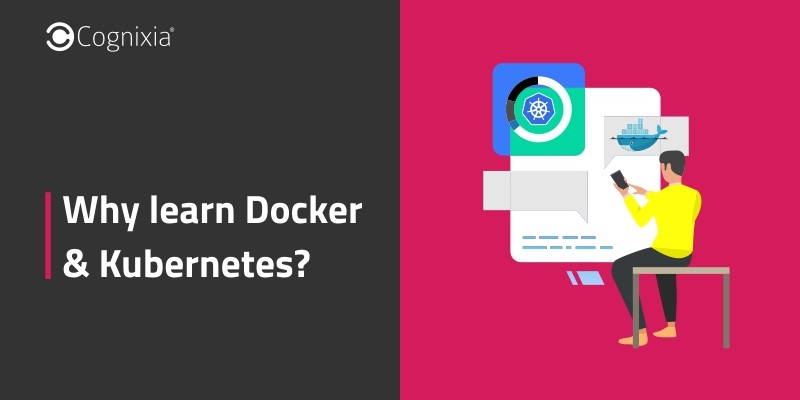 Today, DevOps is the top priority for many programmers. Docker and Kubernetes are essential these days, not just to improve productivity and build better applications, but also from a scalability perspective and more efficient resource management. Irrespective of whether you are developer, a data scientist, a product engineer, a software engineer, or specialize in anything else, being comfortable with Docker and Kubernetes would get you a long way ahead.
Here are top ten reasons to learn Docker and Kubernetes:

Both Docker and Kubernetes are here to stay and are on its way to be the most in-demand technologies in the market. Mastering these two platforms will not only help you produce better software and applications, but will also help you move ahead in your careers and stand out from the crowd.

Cognixia – world’s leading digital talent transformation company, constantly strives to bring to you the latest training and certification programs to help you move ahead in your career, and acquire the essentials skills in emerging technologies. Our Docker and Kubernetes Boot Camp has the latest curriculum and covers all the important concepts – fundamentals of Docker & Kubernetes, running Kubernetes instances on Minikube, creating and working with Kubernetes clusters, working with resources, creating and modifying workloads, the container ecosystem, etc. which would help learners be fully equipped to build a career in DevOps and Microservices.
To know more, visit Docker and Kubernetes Boot Camp.